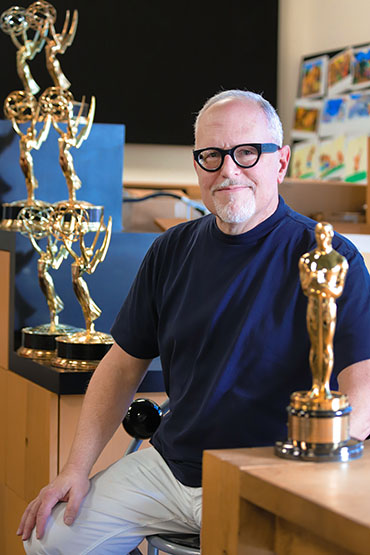 William Joyce has achieved worldwide recognition as an author, illustrator, and pioneer in the digital and animation industry. He began his film career on Toy Story (1995) and has since been a producer, director, screenwriter, and production designer in both animation and live action. In 2009, he founded Moonbot Studios, a multimedia storytelling company producing books, apps, films, and video games.

Among his many awards, Bill has won six Emmys, three Annies, and an Academy Award for his short film “The Fantastic Flying Books of Mr. Morris Lessmore.” He has written and illustrated 50 bestselling children’s books and novels which have been translated into over 40 languages. Bill was named by Newsweek magazine as “one of the 100 people to watch in the new millennium.”

His feature films, all based on his books, include Robots (2005), Meet the Robinsons (2007), Rise of the Guardians (2012), and Epic (2013). His television series include the groundbreaking Rolie Polie Olie, for which he was creator and showrunner.

His new company, Howdybot Studios, is focused on Bill’s stories in a variety of mediums and media. He’s just released his newest short film “Mr. Spam Gets a New Hat,” which is winning awards across the globe. He is also in preproduction on an animated version of The Great Gatsby. Both projects are in collaboration with DNEG studios and Epic games.

Bill hopes to someday serve as the first “Secretary of Cheerful Endeavors” for the United Nations.