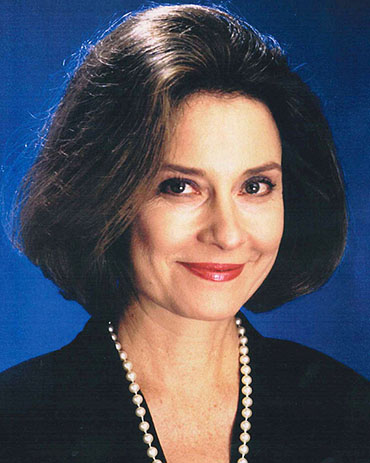 Diane Baker’s distinguished career as an actress and producer of film and television spans over 50 years. First cast in director George Stevens, Sr.’s film The Diary of Anne Frank (1959), her career quickly took off at Twentieth Century-Fox, where her credits include Journey to the Center of the Earth (1959), The Best of Everything (1959), Tess of the Storm Country (1960), Nine Hours to Rama (1963), and Stolen Hours (1963), with Susan Hayward. In subsequent years, Baker worked across the major studios and with Hollywood’s biggest names, starring in The Prize (1963) with Paul Newman, Strait­Jacket (1964) with Joan Crawford, Alfred Hitchcock’s Marnie (1964) with Sean Connery, and Mirage (1965) with Gregory Peck.

Before returning to the screen in the ’90s with contemporary classics like The Silence of the Lambs (1991), The Joy Luck Club (1993), The Net (1995) with Sandra Bullock, and Murder at 1600 (1997) with Alan Alda, Baker expanded her career as a producer, creating several award-winning documentaries (HBO’s To Climb a Mountain, Miracles in the Making) and TV films, including ABC’s Portrait of Grandpa Doc (1977), starring Melvyn Douglas, Barbara Rush, Bruce Davison, and Anne Seymour, directed by Randal Kleiser; the ABC special One of a Kind; CBS’s Malcolm Takes a Shot, directed by Mario Van Peebles; the London-set feature Never Never Land (1980), with Petula Clark and Cathleen Nesbitt; and her six-hour miniseries, A Woman of Substance (1985), starring Deborah Kerr and Liam Neeson—Emmy nominated for Outstanding Limited Series and Outstanding Supporting Actress for Deborah Kerr.

The recipient of numerous lifetime honors and awards, including several Emmy nominations, Baker’s career continues today as an academic and documentarian. She is Chair Emeritus and Executive Director of the School of Motion Pictures and the School of Acting at the Academy of Art University; the recipient of Honorary Doctorates from U.C. Irvine and Academy of Art University; and the recipient of the 2019 Roots of Peace Global Citizen Award for her documentary work in Croatia and Afghanistan on replacing landmines with grapes.

Diane is coproducing a six-part series with her partner, commercial/documentary filmmaker Dennis Powers, on the history of illustration for American television. She is also creating a two-year postgraduate film/acting program, Global Film Connect: The Robert Osborne Center for Film History, to give auditioning students an opportunity to work with professionals in an industry setting and to learn to produce small meaningful films and continue the legacy of TCM’s Robert Osborne, with whom she enjoyed a lifelong friendship.