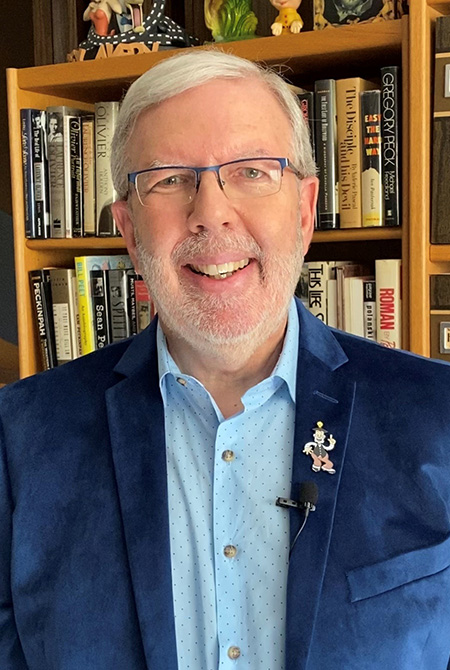 Leonard Maltin is one of the world’s most respected film critics and historians. He is best known for his widely-used reference work Leonard Maltin’s Movie Guide and its companion volume Leonard Maltin’s Classic Movie Guide, as well as his 30-year run on television’s Entertainment Tonight. He teaches at the USC School of Cinematic Arts, appears regularly on Turner Classic Movies, and hosts the weekly podcast “Maltin on Movies” with his daughter Jessie. His latest book is Starstruck: My Unlikely Road to Hollywood; others include Hooked on Hollywood, The 151 Best Movies You’ve Never Seen, Of Mice and Magic: A History of American Animated Cartoons, and The Great Movie Comedians, The Disney Films, and The Art of the Cinematographer. He served two terms as President of the Los Angeles Film Critics Association was appointed by the Librarian of Congress to sit on the Board of Directors of the National Film Preservation Foundation. He hosted and co-produced the popular Walt Disney Treasures DVD series and has appeared on innumerable television programs and documentaries. He is the recipient of awards from the Los Angeles Film Critics Association, American Society of Cinematographers, the Telluride Film Festival, George Eastman House, Anthology Film Archives and San Diego’s Comic-Con International. Perhaps the pinnacle of his career was his appearance in a now-classic episode of South Park. (Or was it Carmela consulting his Movie Guide on an episode of The Sopranos?) He holds court at leonardmaltin.com. Follow him on Instagram, Twitter and Facebook.