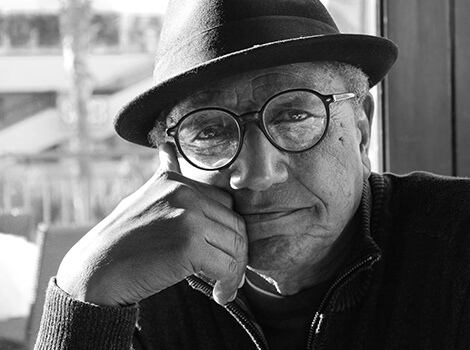 Disney Legend Floyd Norman is an American animator, storyman, and beloved “troublemaker” whose 65+ year career represents creative perseverance. Born in Santa Barbara in 1935, Norman began his career in high school as an assistant to Bill Woggon on Archie Comics’ Katy Keene.  After honing his artistic skills at ArtCenter College of Design in Los Angeles, Norman was hired by the Walt Disney Company in 1956.  He would become the first African American artist to work at Disney long-term.

At 20 years old, he received daily masterclasses from Walt’s leading animators—the “Nine Old Men.”  After completing his work as an assistant inbetweener on Sleeping Beauty (1959), Norman was drafted into the military to serve in the Korean War.  After his tour of duty, Norman would return to Disney unscathed and happy to work on One Hundred and One Dalmatians (1961), The Sword in the Stone (1963), and Mary Poppins (1964).  Simultaneously, Norman was placing pointed gag drawings around the Disney campus that satirized and poked fun at the company’s executives.  Walt Disney saw them and recognized Norman’s brilliance for visual storytelling.  Walt handpicked Norman to join The Jungle Book (1967) Story Department.  Norman would play a vital role in the design and creation of the “Trust in Me” sequence, among others.

In 1966, upon Walt Disney’s death, Norman would take a leap of faith and leave Disney to start Vignette Films, Inc., a first-of-its-kind production company creating stories about African American history-makers for U.S. schools.  Norman and Vignette Films also created animation for Sesame Street (1969-70), Hey, Hey, Hey, It’s Fat Albert (1969), and the main titles for Soul Train (1971), among other one-of-a-kind projects.  Even with those successes, Vignette Films was viewed by the industry as a “Black company” which unfairly limited their client roster and led to their closing in the early 1970s, at which time Norman returned to Disney to work on Bedknobs and Broomsticks (1971) and Robin Hood (1973).

Around the same time, Saturday morning cartoons were becoming a cultural phenomenon and Norman found creative opportunity at Hanna-Barbera writing for classics like Scooby-Doo, Josie and the Pussycats, and Captain Caveman, among others.

In the 1980s, Norman would join Disney Publishing where he wrote and illustrated a number of Disney children’s books, as well as the daily Mickey Mouse comic strip.  In the mid 1990s, Norman returned to Disney Animation to work in the Story Departments of The Hunchback of Notre Dame (1996) and Mulan (1998).  But an invite to the Bay area in the late 1990s would become a career highlight.  Norman was now working with John Lasseter and Steve Jobs at Pixar on Toy Story 2 (1999) and Monsters Inc. (2001) as a storyboard artist.

In 2007, the Disney company recognized Norman’s contributions to the organization by honoring him as a Disney Legend.  In 2013, Norman added to his writing resume by writing his autobiography Animated Life:  A Lifetime of Tips, Tricks, Techniques and Stories from a Disney Legend.  In 2016, his storied career became the focal point of the feature documentary Floyd Norman:  An Animated Life which was broadcast across North America as part of the 2020 TCM Classic Film Festival and is currently streaming on the Criterion Channel.

Today, at 86, Norman continues to illustrate and consult, taking on diverse creative roles in and outside of Disney.  In 2020, he notably returned to Sesame Street to create new animation for the 50th season.  In 2021, Floyd was sought out by NBA superstar Stephen Curry to create original storyboards depicting his 3-point record breaker.  Norman’s illustrations helped raise nearly $4 million for Curry’s Eat. Learn. Play. Foundation.  In 2022, Norman is being inducted into the Society of Illustrators Hall of Fame, among other honors.  He is currently creating a new book about the Disney legacy, among other creative projects.

Floyd Norman continues to do what he loves with the passion of a man in his 20s—proof that age is just a number.

View Full Festival Schedule
Friday, April 22
10:00 am - 11:45 am
THE JUNGLE BOOK (1967)
Festival Tributes
Discussion before
Leonard Maltin, Floyd Norman
El Capitan Theatre
Saturday, April 23
3:00 pm - 4:00 pm
A CONVERSATION WITH FLOYD NORMAN
Floyd Norman, Jacqueline Stewart
Club TCM at The Hollywood Roosevelt Hotel
Be in the know on everything related to the TCM Classic Film Festival Sign Up For TCM Emails
By clicking the 'Submit` button I acknowledge the Privacy Policy