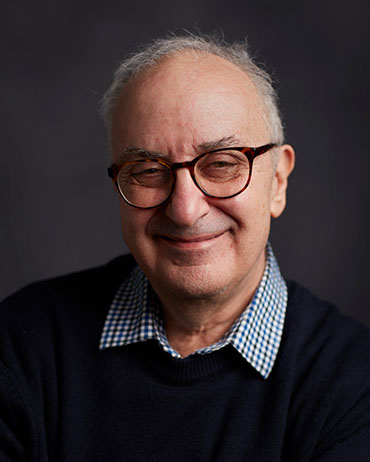 Bruce Goldstein is the founder and co-president of Rialto Pictures and Director of Repertory Programming at New York’s Film Forum cinema.

In recent years, Goldstein has developed a new career as an acclaimed documentarian with his acclaimed short films “In the Footsteps of Speedy,” “The Art of Subtitles,” and “Uncovering the Naked City,” all commissioned by the Criterion Collection and Channel.  His short “Pelham One Two Three: NYC Underground” was commissioned by TCM for the 2021 virtual TCM Classic Film Festival and shown with Goldstein’s other New York-themed shorts on HBO Max.

Goldstein recently appeared on the Criterion Channel with friend and frequent TCM guest Donald Bogle for a 30-minute conversation about one of their favorite topics, dancers the Nicholas Brothers. A friend of the Brothers, Goldstein wrote and coproduced a 1992 documentary on the team and is developing a new project. His presentation on the Brothers at the second TCM Classic Film Festival in 2011 was one of that year’s highlights.

Goldstein has produced events for all of TCM’s Festivals and Cruises. Each year, he’s helped kick off the Festival with his quiz show “So You Think You Know Movies” and has done popular presentations on pre-Code movies, character actors, vaudeville, the art of subtitling, Godzilla, and William Castle’s The Tingler (1959) – Goldstein’s world-renowned re-imagining of Castle’s interactive gimmick Percepto!

At the 2013 Festival, Goldstein re-constructed the missing soundtrack of Frank Capra’s first all-talkie, The Donovan Affair (1929), with a live cast of 10 actors (including himself). This sold-out show was named one of the two most popular events at that year’s Festival.

Goldstein founded Rialto in 1997 as a way to exhibit classics that were then not in U.S. distribution. Among the almost 100 classics re-released by the company are Godard’s Breathless (1960), Fellini’s Nights of Cabiria (1957), Jules Dassin’s Rififi (1955), Renoir’s Grand Illusion (1937), Carol Reed’s The Third Man (1949), the original Japanese Godzilla (1954), and Mel Brooks’s The Producers (1968), which kicked off the 2018 TCM Classic Film Festival. Rialto’s reissue of Jacques Deray’s La Piscine (1969), starring Alain Delon and Romy Schneider, was the biggest revival hit of 2021.

His programming at Film Forum has been called “the Best of New York” by New York Magazine. In 1997, Time Out New York named Goldstein one of the 101 essential people or places of New York, citing him “for keeping showmanship alive,” and, in 2005, “New York’s Finest Film Programmer.” In its 2012 “Best of New York” issue, the Village Voice called him “the Michael Jordan of Film Programmers.” Kent Jones’s profile of Goldstein in Film Comment was entitled “The King of New York.” He’s also been profiled five times in The New York Times and twice in The New Yorker, among many other publications.

In 1990, the New York Film Critics Circle presented Goldstein with a special award “for consistent and imaginative quality programming of repertory films.” In 2002, he was decorated with the French Order of “Chevalier” of Arts & Letters. In 2012, he was the recipient of the first Lifetime Achievement Award in Film ever given by George Eastman House.

View Full Festival Schedule
Thursday, April 21
3:00 pm - 4:00 pm
SO YOU THINK YOU KNOW MOVIES
Bruce Goldstein
Club TCM at The Hollywood Roosevelt Hotel
Saturday, April 23
3:00 pm - 4:45 pm
BABY FACE (1933)
Essentials
Discussion before and after
Bruce Goldstein
Hollywood Legion Theater
Be in the know on everything related to the TCM Classic Film Festival Sign Up For TCM Emails
By clicking the 'Submit` button I acknowledge the Privacy Policy