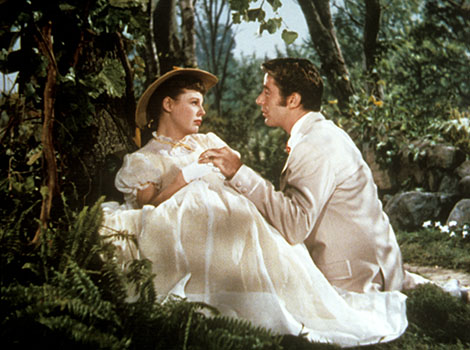 The fourth of seven big-screen adaptations of Louisa May Alcott’s beloved novel began as a project for independent producer David O. Selznick, who planned the film as a showcase for his future wife, Jennifer Jones, and a teenage Shirley Temple. When none of it seemed to be working, he sold the package, including already-built sets, to MGM. For that studio, the film offered an opportunity to team established stars June Allyson and Margaret O’Brien with the up-and-coming Elizabeth Taylor and Janet Leigh. Rather than being competitive, the four actors bonded, becoming, if anything, closer off-screen than the March sisters are on-screen as they try to survive poverty during the Civil War. That was sometimes a problem for director Mervyn LeRoy, who had to contend with the actresses breaking each other up during takes. Although some reviewers preferred director George Cukor’s 1933 version with Katharine Hepburn, audiences were enchanted, making the film one of the year’s top-grossing pictures. Those Selznick sets even helped it earn an Oscar for Best Art Direction. (d. Mervyn LeRoy, 122m, 35mm)

We regret Margaret O’Brien will be unable to attend this event as previously announced. However, Ms. O’Brien will appear at a separate interview in the lobby of the Hollywood Roosevelt Hotel at 11:30am on Sunday, April 24.