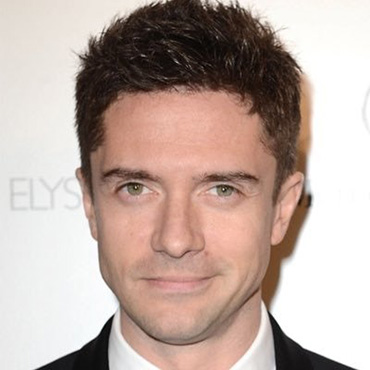 Acclaimed actor Topher Grace first caught the attention of audiences as one of the stars of the iconic television series That ’70s Show before making his mark on the big screen in numerous films. He currently stars in the ABC comedy series Home Economics and recently starred in Jon Stewart’s second directorial feature, the political comedy Irresistible (2021), opposite Steve Carell and Chris Cooper.

In early 2019, Grace was nominated for a SAG Award with his cast for his portrayal of David Duke in Spike Lee’s award-winning BlacKkKlansman (2018), opposite John David Washington and Adam Driver. BlacKkKlansman chronicled the true story of an African American detective in Colorado who successfully infiltrated the KKK. Grace also appeared in David Robert Mitchell’s neo-noir Under the Silver Lake in 2019, opposite Andrew Garfield. Both films premiered at the Cannes Film Festival in 2018.

In 2019, he also appeared both as the elusive tech CEO Billy Bauer in the “Smithereens” episode in season five of the Netflix cult hit Black Mirror, as well as Dr. Peter Jahrling in the Nat Geo ebola-focused limited series The Hot Zone, opposite Julianna Margulies.

In 2017, Grace co-starred in the David Michôd Netflix black comedy, War Machine, opposite Brad Pitt, based on Michael Hastings’ book The Operators: The Wild and Terrifying Inside Story of America’s War in Afghanistan. Prior, Grace starred in the Sony Pictures Classics drama Truth (2015), opposite Robert Redford, Cate Blanchett, Dennis Quaid, and Elisabeth Moss. The film tells the true story of a group of journalists—with Grace portraying rebellious researcher Mike Smith—who uncover a conspiracy that would bring down President George W. Bush’s presidency. The film had its world premiere at the 2015 Toronto International Film Festival.

In 2016, Grace moved behind the camera and completed production as producer and star of the romantic musical comedy Opening Night, directed by Isaac Rentz. The film, featuring Anne Heche and Taye Diggs, follows a failed Broadway singer working as a production manager who must save opening night by wrangling his eccentric cast and crew.

On the big screen, Grace won the National Board of Review Award for Breakthrough Performance by an Actor, as well as a New York Film Critics Online Award, for his roles in In Good Company and P.S. in 2004. As a member of the ensemble cast in Steven Soderbergh’s Traffic (2000), he also won a Screen Actors Guild Award in 2001.

His television credits include That ’70s Show and Curtis Hanson’s Golden Globe-winning TV film, Too Big to Fail (2011), for HBO. He also appeared in The Beauty Inside, a 2012 social film developed by Intel and Toshiba. Directed by Drake Doremus and co-starring Mary Elizabeth Winstead, the film was broken up into six filmed episodes interspersed with interactive storytelling that all took place on the main character’s Facebook timeline. Grace won a Daytime Emmy in the category of Outstanding New Approaches – Original Daytime Program or Series for his performance.

In 2014, Grace made his off-Broadway debut in Paul Weitz’s acclaimed Lonely, I’m Not, opposite Olivia Thirlby, for Second Stage.

Grace grew up in Darien, Connecticut, and currently resides in Los Angeles, California.

View Full Festival Schedule
Thursday, April 21
7:30 pm - 9:30 pm
FAST TIMES AT RIDGEMONT HIGH (1982)
Poolside at the Hollywood Roosevelt
Discussion before
Topher Grace, Dave Karger
Poolside at The Hollywood Roosevelt Hotel
Be in the know on everything related to the TCM Classic Film Festival Sign Up For TCM Emails
By clicking the 'Submit` button I acknowledge the Privacy Policy