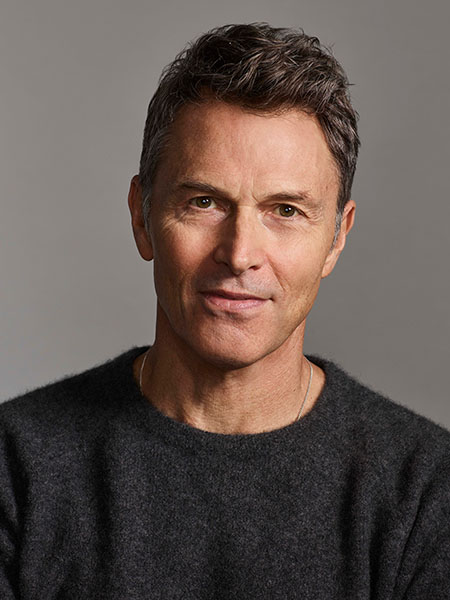 Actor, director, producer, and philanthropist Tim Daly, whose resume spans a long list of diverse projects and advocacy efforts, is known for starring as Henry McCord, ethics advisor to the President, in the hit CBS series Madam Secretary, along with Téa Leoni and Keith Carradine.

In 2021, Daly appeared on Paramount+’s new series The Game as Colonel Thatcher, a self-made billionaire and owner of the Las Vegas Fury football team. Daly also starred in The Sixth Reel (2021), directed by Carl Andress and Charles Busch. The film, which also stars Margaret Cho and André De Shields, depicts a group of obsessive collectors who concoct a wild scheme to cash in on a long-thought lost final reel of an undiscovered feature. The Sixth Reel premiered at Outfest in August of 2021 and received a special jury mention for ensemble performance.

In 2018, Daly starred opposite his sister, Tyne Daly, in Theresa Rebeck’s new play, Downstairs, at the Cherry Lane Theater. The play was first produced at the Dorset Theater Festival, where Daly has done several other productions. Daly starred as Teddy, an eccentric and possibly delusional man living in his sister’s basement who begins to uncover disturbing secrets about their family.

After making his feature film debut in Barry Levinson’s Diner (1982), Daly went on to starring roles in Made in Heaven (1987), Year of the Comet (1992), and Denise Calls Up (1995), which was released by Sony Pictures Classics and received the Special Jury Prize at the 1995 Deauville Film Festival. In addition, the film was awarded a special mention for the Camera d’Or at the 1995 Cannes Film Festival. Daly’s other notable film roles include Against the Ropes (2004), with Meg Ryan; Return to Sender (2004), opposite Aidan Quinn and Connie Nielsen; Basic (2003), opposite John Travolta and Samuel L. Jackson; The Object of My Affection (1998), opposite Jennifer Aniston and Paul Rudd; and Low Down (2014), a feature starring Elle Fanning and John Hawkes on which Daly served as associate producer.

Daly appeared in several episodes of HBO’s hit series The Sopranos as J.T., a screenwriter in the grips of both a drug addiction and a gambling problem. Daly received an Emmy Award nomination for Outstanding Guest Actor in a Drama Series for this role, which was created specifically for him by David Chase with whom Daly worked on his first series, CBS’s Almost Grown.

Before beginning Madam Secretary, Daly appeared on the small screen in multiple episodes of both TV Land’s hit show Hot in Cleveland, portraying a detective who, having recently lost 300 pounds, finds himself in a love triangle with Jane Leeves and Valerie Bertinelli’s characters, and on Fox’s The Mindy Project, playing a New York cop and love interest to Mindy Kaling’s character. Between projects, Daly created episodes for the second season of The Daly Show, a web series Daly created with his son, actor Sam Daly, and director Ben Shelton. Other critically acclaimed television series in which Daly has starred include ABC/Warner Bros.’ The Nine and Eyes. In the latter, he was reunited with creator John McNamara, with whom Daly worked on the critically acclaimed CBS/Warner Bros. remake of The Fugitive. Daly’s portrayal of Dr. Richard Kimble earned him a SAG Award nomination. For five seasons, he starred as Dr. Pete Wilder on ABC’s Private Practice. Daly’s other notable television acting credits include David Koresh in ABC’s In the Line of Duty: Ambush in Waco (1993), Jim Lovell in HBO’s From the Earth to the Moon, Joe Hackett in NBC’s comedy series Wings, the lead in ABC’s Stephen King miniseries Storm of the Century, and the male lead in the Showtime original film The Outsider (2002), opposite Naomi Watts. Daly also voices the iconic superhero Superman in both the animated series and two animated features.

Daly has long played the role of producer. He served as executive producer on the Showtime feature Execution of Justice (1999), which garnered him a GLAAD Award for Outstanding Made for Television Movie. In the film he portrays Dan White, the 1978 assassin who murdered San Francisco’s first openly gay supervisor, Harvey Milk, and Mayor George Moscone. He also produced the film Edge of America, which opened the 2004 Sundance Film Festival. As the film’s producer, Daly won the Humanitas Prize and the George Foster Peabody Award. The film also received a Writers Guild of America Award (Children’s Script – Long Form or Special) and a Directors Guild of America Award (Outstanding Directorial Achievement in Children’s Programs). Daly played a blue-collar factory worker and single father in this tale of a girl’s Native American basketball team and their cultural struggles. In 2009, Daly attended the Tribeca Film Festival with the Barry Levinson directed documentary film PoliWood, which Daly produced with Robert E. Baruc, Robin Bronk, and Jason Sosnoff. PoliWood presents an in-depth look at the 2008 presidential election, blending footage from the Republican and Democratic conventions, as well as interviews with celebrities and key political figures.

Daly’s association and work with PoliWood stemmed from his long involvement with The Creative Coalition, for which he has served as president for the past eight years. The Coalition is a nonprofit, nonpartisan, social and political advocacy organization in which members of the entertainment community promote issues of public importance, specifically in the areas of First Amendment rights, arts advocacy, and public education. Fully committed to his belief that arts and creativity are the key to our nation’s success, Daly also serves on the board of InsideOUT Writers, a non-profit organization whose mission is to reduce the juvenile recidivism rate by providing a range of services that evolves to meet the needs of currently and formerly incarcerated youth and young adults. Using creative writing as a catalyst for personal transformation, these young people are empowered with the knowledge and skills necessary to successfully reintegrate into our communities, becoming advocates for their future.

Always eager to return to the stage and his home in Vermont, Daly has spent many summers working at the Dorset Theatre Festival, first playing Charlie”in Theresa Rebeck’s The Scene and then tackling the role of Mark Rothko in John Logan’s Red. In 2012, Daly performed the role of Flan in Six Degrees of Separation at the Williamstown Theatre Festival. The play, which marked Daly’s fourth appearance at Williamstown, was directed by acclaimed theatre director Anne Kauffman. In 2006, Daly returned to his Broadway theatre roots (his first appearance in Coastal Disturbances earned him the Theatre World Award) in The Caine Mutiny Court-Martial, directed by Jerry Zaks. Other theatre credits include The Exonerated at the Bleecker Street Theatre, Henry Flamethrowa at Studio Dante, and Olivier, Olivier at the Manhattan Theatre Club. His many regional appearances include Fifth of July, Buried Child, and Bus Stop at Trinity Square Repertory, among others; The Glass Menagerie at the Santa Fe Festival Theatre; A Knife in the Heart and A Study in Scarlet both at the Williamstown Theatre Festival; and Paris Bound at the Berkshire Theatre Festival. He won the Drama-Logue Award for Best Actor in the Los Angeles Coast Playhouse production of The Colorado Catechism.

Daly, a father or two, studied theatre and literature at Bennington College and divides his time between New York, Vermont, and Connecticut.