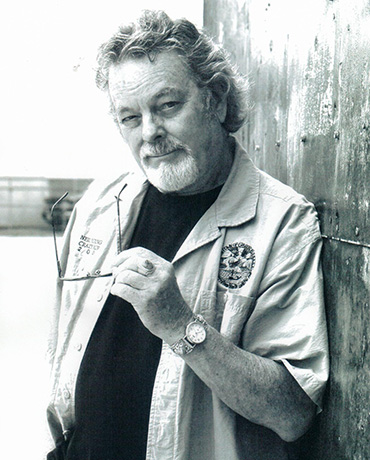 Russ Tamblyn’s career as an actor, dancer, choreographer, director, and artist has spanned over six decades. Born December 30, 1934, into a show business family, Russ has performed in every kind of venue, from small playhouses to Madison Square Garden. His roots began in the heyday of Hollywood; he was discovered by Lloyd Bridges who gave 10-year-old Russ his first part in a play, The Stone Jungle. This launched Russ into an extensive career in motion pictures, television, and theater.

Russ’s first motion picture credit came in 1948, when he played a supporting role in The Boy with Green Hair. Cecil B. DeMille saw a special quality in Russ and cast him as young King Saul in the epic Samson and Delilah (1949). Next was the title role in The Kid from Cleveland (1949), and many films followed, including Father of the Bride (1950) and Father’s Little Dividend (1951), in which he portrayed Elizabeth Taylor’s brother. But it was his dynamic performance in Warner Bros.’ Retreat, Hell! (1952) that won him a long-term contract with MGM studios. While there, Russ starred in the classic musical, Seven Brides for Seven Brothers (1954), bringing him worldwide fame for his dancing and acting. He also starred opposite Debbie Reynolds in Hit the Deck (1955). His musicality, championship tumbling, and cat-like agility, blending with his strong dramatic skills, made Russ MGM’s “Most Popular Young Star!”

Russ’s career skyrocketed with an Academy Award nomination for Best Supporting Actor in the critically acclaimed film, Peyton Place (1957). He also received a Golden Globe Award for Most Promising Newcomer. From there, Russ was offered starring roles in some of the hottest films in Hollywood, including the title role in Tom Thumb (1958), Don’t Go Near the Water (1957), and The Haunting (1963). Most notably, Russ starred in West Side Story (1961) as Riff, leader of the Jets.

Russ continued in his first love of the performing arts by starring in such theatrical works as Cabaret, Follies, The Music Man, and Bye Bye Birdie, opposite Chita Rivera. In the sixties, seeking a deeper means of self-expression, Russ’s creative focus shifted from the performing arts to the fine arts. His unique work in collage and assemblage brought him recognition in numerous gallery exhibitions and museums, including the Los Angeles Institute of Contemporary Art and the Los Angeles County Museum of Art. His art and poetry can be found in numerous international art publications.

In this new arena of creativity, Russ was also instrumental in the New Hollywood era, which produced the cult classic The War of the Gargantuas (1966) and Dennis Hopper’s The Last Movie (1971). He partnered with Neil Young, Dean Stockwell, the band Devo, and Hopper again to cocreate the nuclear comedy Human Highway (1982).

Tamblyn’s television credits are many, but he is best known for David Lynch’s iconic television show Twin Peaks (1990-91), playing Dr. Jacoby, and for reprising his character as Doctor Amp twenty years later in Lynch’s Twin Peaks: The Return (2017). Russ played “Dog Walker God” in his daughter Amber Tamblyn’s series, Joan of Arcadia (2004). In an homage to his role in the original film The Haunting, Tamblyn appeared in the remake, The Haunting of Hill House, on Netflix in 2018. He recently appeared in a memorable cameo in Quentin Tarantino’s Django Unchained (2012).