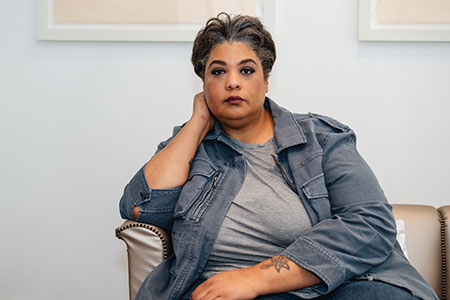 Roxane Gay’s writing appears in Best American Mystery Stories 2014, Best American Short Stories 2012, Best Sex Writing 2012, A Public Space, McSweeney’s, Tin House, Oxford American, American Short Fiction, Virginia Quarterly Review, and many others. She is a contributing opinion writer for the New York Times. She is the author of the books Ayiti, An Untamed State, the New York Times bestselling Bad Feminist, the nationally bestselling Difficult Women, and the New York Times bestselling Hunger. She is also the author of World of Wakanda for Marvel. She has several books forthcoming and is also at work on television and film projects. She also has a newsletter, The Audacity and a podcast, The Roxane Gay Agenda.

View Full Festival Schedule
Sunday, April 24
2:30 pm - 3:30 pm
REFRAMED: EXPLORING THE COMPLEX TOPIC OF ART VS. THE ARTIST
Roxane Gay, Jacqueline Stewart, Nancy Wang Yuen, Ben Mankiewicz
Club TCM at The Hollywood Roosevelt Hotel
Be in the know on everything related to the TCM Classic Film Festival Sign Up For TCM Emails
By clicking the 'Submit` button I acknowledge the Privacy Policy