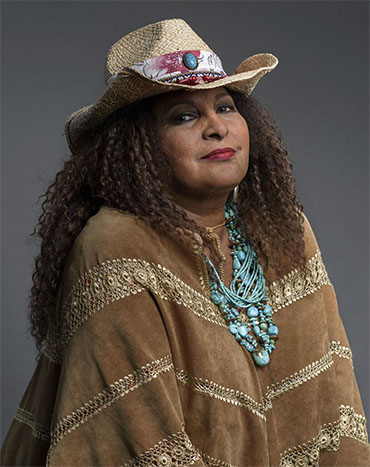 Pam Grier was born in Winston-Salem, North Carolina, the daughter of Gwendolyn Sylvia (née Samuels), a homemaker and nurse, and Clarence Ransom Grier, who worked as a mechanic and Technical Sergeant in the United States Air Force. She has one sister and one brother. Because of her father’s military career, her family moved frequently during her childhood, to various places such as England, and eventually settled in Denver, Colorado, where she attended East High School. While in Denver, Colorado she appeared in a number of stage productions, and participated in beauty contests to raise money for college tuition toward Metropolitan State College.

Grier moved to Los Angeles, California, in 1969, where she was initially hired as a receptionist at the American International Pictures (AIP) Company. She was discovered by director Jack Hill, who cast her in his women in prison films The Big Doll House (1971), and The Big Bird Cage (1972). While under contract at AIP, she became a staple of early 1970s blaxploitation movies, playing big, bold, assertive women, beginning with Jack Hill’s Coffy (1973), in which she plays a nurse who seeks revenge on drug dealers; her character was advertised in the trailer as the “baddest one-chick hit-squad that ever hit town!” The film was a box-office hit, and Grier was noted as the first African American female to headline an action film, as protagonists of previous blaxploitation films were male. In his review of Coffy, film critic Roger Ebert noted that Grier was an actress of “beautiful face and astonishing form” and that she possessed a kind of “physical life” missing from other actresses. Grier subsequently played similar characters in the AIP films Foxy Brown (1974), Friday Foster, and Sheba, Baby (both 1975).

She acquired progressively larger character roles in the 1980s, including a prostitute in Fort Apache the Bronx (1981), a witch in Something Wicked This Way Comes (1983), and Steven Seagal’s detective partner in Above the Law (1988). She made guest appearances on Miami Vice, Martin, Night Court, Sparks, and The Fresh Prince of Bel Air, and also had a recurring role in the TV series Crime Story between 1986 and 1988. She also appeared on Sinbad, The Preston Episodes, The Cosby Show, The Wayans Brother Show, and Mad TV. In 1994, Grier appeared in Snoop Doggy Dogg’s video for “Doggy Dogg World.”

She appeared in Sam Shepard’s play Fool for Love and won the 1984 NAACP Image Award for Best Actress in a Play. She went on to awards for Terrence McNally’s Frankie and Johnny in the Claire De Lune and The Piano Lesson by August Wilson.

In the late 1990s, Grier was a cast member of the Showtime series Linc’s. She again appeared in 1997 with the title role in Quentin Tarantino’s Jackie Brown, a film that partly paid homage to her ’70s blaxploitation movies. Between 2004-2009, Pam appears in the Showtime series The L Word as Kit Porter and occasionally guest stars in such television series as Law & Order: Special Victims Unit (where she is a recurring character).

In 2010, Grier began appearing in a recurring role on the hit science fiction series Smallville as the villain Amanda Waller, also known as White Queen, head agent of Checkmate, a covert operations agency. She portrayed Queen Latifahs’s mother in the film Just Wright (2010) and appeared in the film Larry Crowne (2011), written, directed, and starring Tom Hanks and costarring Julia Roberts; the film Mafia (2012) with Ving Rhames; and the film The Man with the Iron Fists (2012), directed by RZA and written by Eli Roth.

Also in 2010, she wrote her memoir, Foxy: My Life in Three Acts, with Andrea Cagan, which became a New York Times best seller, won the best memoir award from the African American Literary organization in 2010, and received the Golda Meir Center for Political Leadership Award in 2010.

In 1997 Grier was nominated for a Golden Globe and a Screen Actors Guild Award for best actress for Jackie Brown In 2000 she received a Daytime Emmy nomination for Outstanding Performer in an Animated Program for “The Empress’ Nightingale” episode of HBO’s Happily Ever After: Fairy Tales for Every Child.

In collaboration with Subaru Corporation and the National Multicultural Western Heritage Museum, she started the first Pam Grier Community Garden and Education Center in Dallas, Texas, 2011.

In 2011, Grier received Doctorate of Humane Letters from Maryland University Eastern Shore, an Honorary Doctorate of Science from Langston University, and the Visionary Award from The Entertainment Aids Alliance.

For the 3rd year, Grier will be cohosting Dining Out for Life events, supporting the national charity Project Angel Heart.

She recently performed in an emotionally gripping arc in the NBC hit drama, This Is Us. She can also be seen staring opposite Diane Keaton, Jacki Weaver, and Rhea Perlman in the feature film Poms (2019) and the series Bless This Mess for ABC, also starring Dax Shepard and Lake Bell.