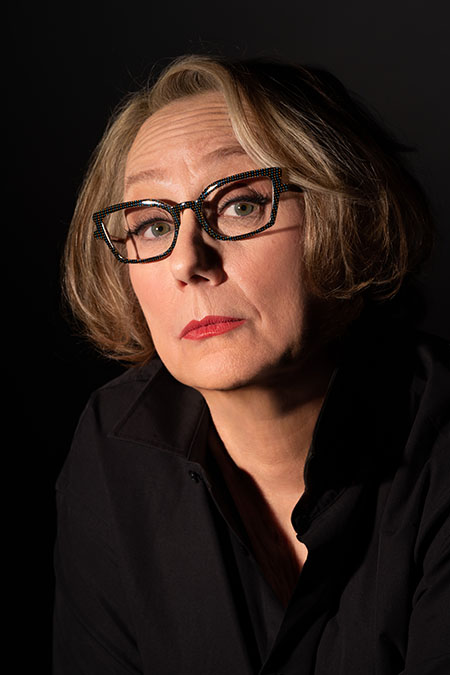 A native of Baltimore, Mink Stole was born Nancy Stoll, the fifth of an eventual ten children. She attended a series of public and Catholic schools, where she developed a fondness for good English grammar and a permanent distrust of authority.

A chance meeting with aspiring filmmaker John Waters in Provincetown, Massachusetts, in the summer of 1966 was the beginning of a decades-long friendship and of her acting career.  Waters cast her in multiple roles in his triple-projected, 8mm, Andy Warhol-inspired Roman Candles.  Nancy Stoll was then re-christened Mink Stole, as both she and Waters were convinced her birth name was too ordinary for film; it was also an attempt to shield her family from the controversy of her new career. It took the mainstream popularity of Hairspray (1988) to put her mother’s fears for her reputation finally to rest.

Mink has appeared in every feature film John Waters has made, creating such memorable characters as the flame-haired Connie Marble, who, along with her blue-haired husband Raymond, vied for the title of Filthiest Person Alive in Pink Flamingos (1972); the unhappy, unloved girl-child Taffy Davenport in Female Trouble (1974); the fugitive housewife turned evil princess Peggy Gravel in Desperate Living (1977); Dottie Hinkle, the unwitting neighbor to a serial killer in Serial Mom (1994); and the cornrow-sporting Sandra Sullivan, rival to Divine’s hapless Francine Fishpaw, in Polyester (1981).

Although she is certainly best known for her work with Waters, throughout the years Mink has worked with other directors. She played the homophobic mom in Jamie Babbit’s But I’m a Cheerleader (1999); the gay-supportive mother/aunt in the variously-directed Eating Out series (2004-2012); and the book-loving victim of a deranged librarian in the Joshua Grannell (a.k.a. Peaches Christ) comic horror film All About Evil (2010). She performed a voice-over role as a jury forewoman in David Lynch’s Lost Highway (1997). She played a zealously Christian prison inmate in Stuck! (2010), directed by Steve Balderson, with whom she recently finished shooting an as-yet-unnamed feature.

In the early 1970s, Mink spent some time in San Francisco, where she performed on stage with the legendary drag troupe The Cockettes. She was also active in the downtown New York theater scene in the early ‘80s, appearing in several productions at the Theater for the New City, and with the late, great Charles Ludlam at the Ridiculous Theatrical Company.  As part of the annual Tennessee Williams Festival in Provincetown, in 2013 she starred in a revival of Williams’ The Mutilated, directed by Cosmin Chivu, which also had limited runs off-Broadway in New York and in New Orleans.  In early 2020, she was featured in the revival of Tom Eyen’s Women Behind Bars, directed by Scott Thompson, at the Montalban Theater in Los Angeles.  She and her good friend Peaches Christ have created a two-woman show, Idol Worship, which they perform both around the United States and internationally.  With her Wonderful Band, she has released one album, Do Re Mink.

View Full Festival Schedule
Saturday, April 23
12:00 am - 1:45 am
POLYESTER (1981)
Midnight Movies
Discussion before
Mink Stole, Mario Cantone
Chinese Multiplex House 6
Be in the know on everything related to the TCM Classic Film Festival Sign Up For TCM Emails
By clicking the 'Submit` button I acknowledge the Privacy Policy