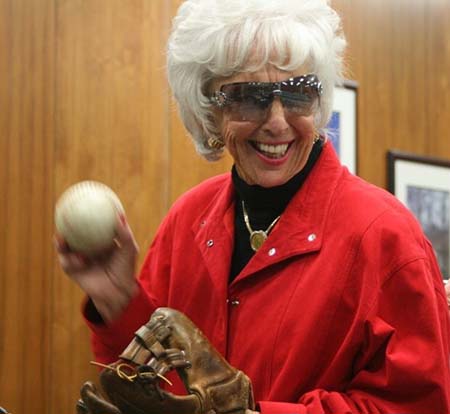 Maybelle Blair is a former pitcher who played in 1948 for the All-American Girls Professional Baseball League, made famous by the movie A League of Their Own (1992). She also played in the National Women’s Softball League in Chicago in the early 1950s. After baseball she worked for Northrup Aircraft where she became the first female manager of transportation. She now travels the United States speaking on behalf of women’s baseball. She has been featured on CBS Sunday Morning, Good Morning America, honored at Fenway Park in Boston, Chicago’s Wrigley Field, and both Angel Stadium and Dodger Stadium in Los Angeles. She is an ambassador for the Boston Red Sox Women’s Fantasy Camp, Baseball for All, Inc., and a founding member of the International Women’s Baseball Center, Inc.