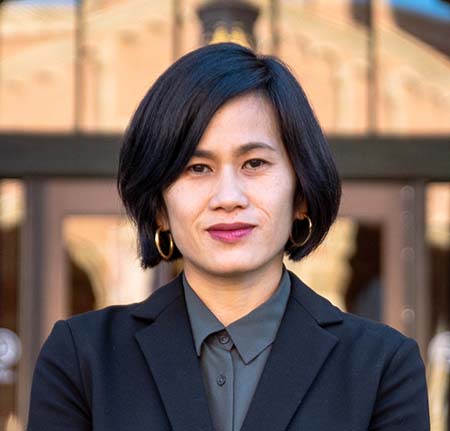 May Hong HaDuong is the fourth director in the UCLA Film & Television Archive’s 55-year history and the first woman and person of color to lead the organization. May was the senior manager of public access at the Academy of Motion Picture Arts and Sciences, where she served as a principal representative for the Academy Film Archive. Prior to serving at the Academy Film Archive, she was the project manager for the Outfest UCLA Legacy Project for LGBT Moving Image Preservation, a collaboration between the UCLA Film & Television Archive and Outfest, which produces the Outfest Los Angeles LGBTQ Film Festival. She currently serves on the Legacy Project Advisory Committee and on the Board of Directors of the ONE Archives Foundation.

View Full Festival Schedule
Friday, April 22
9:30 pm - 11:15 pm
I, THE JURY 3D (1953)
Special Presentation
May Hong HaDuong, Eddie Muller
Chinese Multiplex House 6
Be in the know on everything related to the TCM Classic Film Festival Sign Up For TCM Emails
By clicking the 'Submit` button I acknowledge the Privacy Policy