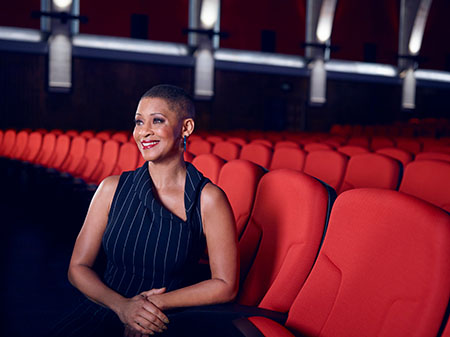 Jacqueline Stewart is the host of Silent Sunday Nights on Turner Classic Movies (TCM). Silent Sunday Nights showcases silent films from all over the world, including both feature films and silent shorts, spanning from the work of director Oscar Micheaux to pioneer Mabel Normand, and actor Douglas Fairbanks to filmmaker Robert Flaherty.

In 2021, Stewart joined the Academy Museum of Motion Pictures as the Chief Artistic and Programming Officer. In this executive position, she leads strategy and planning for the Academy Museum’s curatorial, educational, and public programming initiatives, including exhibitions, screenings, symposia, publications, workshops, and K-12 programs.

Stewart was named a MacArthur Fellow in 2021 for ensuring that the contributions of overlooked Black filmmakers and communities of spectators have a place in the public imagination.

She is also a professor in the Department of Cinema and Media Studies at the University of Chicago, where she is Director of the Arts + Public Life. She teaches American film history, specializing in African American cinema from the silent era to the present. In 2018, Stewart was inducted into the American Academy of Arts and Sciences.

Stewart is the author of the award winning book Migrating to the Movies: Cinema and Black Urban Modernity, a study of African Americans and silent cinema. She is coeditor of L.A. Rebellion: Creating a New Black Cinema, a landmark study of the first generation of film school trained Black filmmakers out of UCLA, including Charles Burnett, Julie Dash, and Haile Gerima. Stewart’s writings have appeared Critical Inquiry, Film Quarterly, Film History and The Moving Image. She has two forthcoming books, on directors William Greaves and Spencer Williams.

Stewart is a passionate film archivist and advocate for film preservation. She studied moving image archiving at UCLA and the FIAF (International Federation of Film Archives) Summer School film restoration program at the Cineteca Bologna in Italy. She is a three-term appointee to the National Film Preservation Board (NFPB), which advises the Librarian of Congress on film preservation policy. As Chair of the NFPB Diversity Task Force, Stewart is currently authoring reports on diversity, equity and inclusion on the National Film Registry and in the film archival profession. Stewart has served on the Boards of Chicago Film Archives and the Association of Moving Image Archivists.