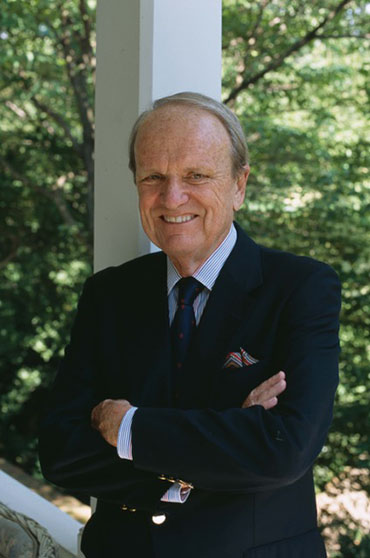 George Stevens Jr. has achieved an extraordinary creative legacy over a career spanning more than 50 years. He is a writer, director, producer, playwright, and author. He has enriched the film and television arts as a filmmaker and is widely credited with bringing style and taste to the national television events he has conceived.

As a writer, director and producer, Stevens has earned many accolades, including 15 Emmys, two Peabody Awards for Meritorious Service to Broadcasting, the Humanitas Prize, and 8 awards from the Writers Guild of America, including the Paul Selvin Honorary Award for writing that embodies civil rights and liberties. In 2012 the Board of Governors of the Academy of Motion Picture Arts and Sciences voted to present Stevens with an Honorary Award for “extraordinary distinction in lifetime achievement.” Stevens’s memoir, My Place in the Sun: Life in the Golden Age of Hollywood and Washington, will be released on May 17, 2022.

Stevens served as Cochairman of the President’s Committee on the Arts and Humanities following his appointment by President Obama in 2009.

Stevens is Founding Director of the American Film Institute, and during his tenure more than 10,000 irreplaceable American films were preserved and catalogued, to be enjoyed by future generations. In addition, he established the AFI’s Center for Advanced Film Studies, which gained a reputation as the finest learning opportunity for young filmmakers.

Stevens was executive producer of The Thin Red Line (1998), which was nominated for seven Academy Awards, including Best Picture. He cowrote and produced The Murder of Mary Phagan, starring Jack Lemmon, which received the Emmy for Outstanding Miniseries. He wrote and directed Separate But Equal, starring Sidney Poitier and Burt Lancaster, which also won the Emmy for Outstanding Miniseries. Stevens won two Emmys for the 1994 documentary, George Stevens: D-Day to Berlin, which depicted the wartime experiences of his father, one of the most highly regarded directors of all time. He produced an acclaimed feature length film about his father, George Stevens: A Filmmaker’s Journey (1984).

Stevens made his debut as a playwright in 2008 with Thurgood, which opened at the historic Booth Theater on Broadway. The play had an extended run starring Laurence Fishburne as Supreme Court Justice Thurgood Marshall. Fishburne received a Tony nomination and returned to the role in the summer of 2010, with runs at the Kennedy Center and the Geffen Playhouse in Los Angeles. Thurgood was filmed while at the Kennedy Center and shown on HBO in 2011. In 2006, Alfred A. Knopf published Stevens’s Conversations with the Great Moviemakers of Hollywood’s Golden Age, the first book to bring together the interviews of master moviemakers from the American Film Institute’s renowned Harold Lloyd Master Seminar series. Conversations at the American Film Institute with the Great Moviemakers: The Next Generation was released by Knopf in April 2012.

Stevens, in collaboration with his son and partner Michael Stevens, produced the feature-length documentary Herblock: The Black & the White (2013) on the famed political cartoonist Herbert Block that was broadcast in January 2014 on HBO.