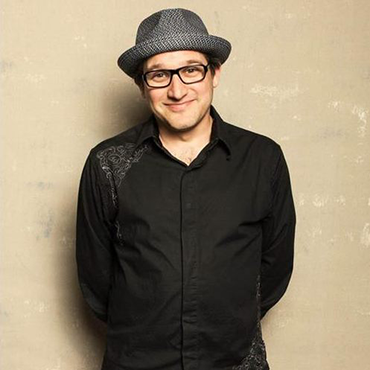 Eban Schletter is a prolific composer and songwriter who has written music for countless television shows including SpongeBob SquarePants, Mr. Show with Bob and David, and the Academy Awards. His feature film scores include the 2005 remake of The Cabinet of Dr. Caligari and New Line Cinema’s Dumb and Dumberer: When Harry Met Lloyd (2003). He has also maintained a steady output of solo albums which explore a broad range of musical genres.

For over a decade, he has been the musical right-hand man for comedian Paul F. Tompkins, serving as music director/arranger for Paul’s infamous live variety shows at LA’s Largo at the Coronet and providing the piano atmosphere for the acclaimed Pod F. Tompkast.

A multi-instrumentalist, Eban has performed on keyboards, drums, bass, clarinet, and other instruments with a variety of artists, including Jill Sobule, Grant-Lee Phillip,s and Garfunkel & Oates.

Over the years, he has often been called upon for his piano-playing skills. He performed a song (recorded live on set) with Mandy Patinkin in the film Run Ronnie Run (2002) and appeared as the piano player in a scene with Philip Seymour Hoffman in The Master (2012), where his piano improvisations were also used.

But it is his ability on the theremin which he is fast becoming recognized for. He has played theremin on albums by Tom Freund, Sean Pawling, and The Doubleclicks, and performed on the instrument in Ryan Gosling’s film Lost River (2014).