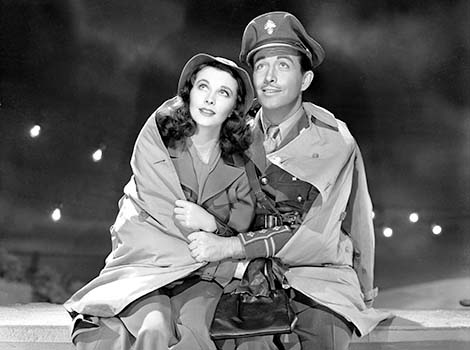 Vivien Leigh cemented her position as one of the screen’s great actresses by following her triumphant performance in Gone with the Wind (1939) with this wartime romance. Waterloo Bridge was the second big-screen version of Robert E. Sherwood’s play about a prostitute who falls in love with a soldier during World War I. For the remake, MGM updated the story to World War II and made the characters British, though leading man Robert Taylor didn’t attempt an accent. To appease the censors, Leigh doesn’t turn to prostitution until erroneously informed that Taylor is dead—and even then, her new profession is only hinted at. The star had hoped to make the film with future husband Laurence Olivier, but MGM had him busy costarring with Greer Garson in Pride and Prejudice (1940). In her love scenes, she pretended Taylor was Olivier, which may account for their heartfelt nature. For his part, Taylor delivered one of his best performances in a role he would later say was his favorite. The supporting cast includes Lucile Watson, Maria Ouspenskaya, and Virginia Field. (d. Mervyn LeRoy, 109m, 35mm)