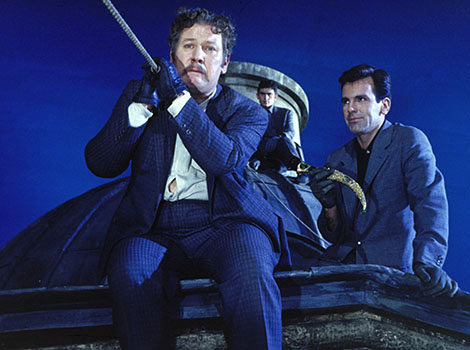 Having virtually created the international heist film with Rififi (1955), director Jules Dassin spoofed the genre with this lighthearted thriller based on Eric Ambler’s novel The Light of Day. Shot in Technicolor by Henri Alekan on locations in Turkey, Greece, and France—vividly rendered in this new restoration from The Film Foundation in collaboration with MGM—the film follows a group of adventurers led by Melina Mercouri and Maximilian Schell out to steal a jewel-encrusted dagger from the Topkapi Palace in Istanbul. To smuggle their equipment into Turkey, they enlist a bumbling tour guide (Oscar-winner Peter Ustinov) who winds up in police custody and is forced to spy on his comrades—even though he has no idea what they’re up to. The climactic heist scene, lasting a tense and nearly silent 40 minutes, is a tour de force. It inspired both the television series Mission: Impossible and a failed attempt to steal the Star of India from the American Museum of Natural History in New York City. (d. Jules Dassin, 120m, 35mm)

Special thanks to Christopher Nolan and Emma Thomas.