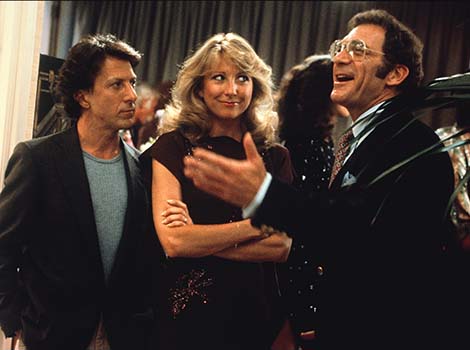 In the early 1980s, drag was in at the Oscars, with Dustin Hoffman nominated for Best Actor for Tootsie, Julie Andrews up for Best Actress for Victor/Victoria (1982), and Barbra Streisand’s Yentl (1983) landing five nominations. With an original script by at least seven writers (even more are rumored), Tootsie didn’t have the pedigree of the other two adaptations, which may have made it the most daring. Certainly, the idea of an unemployed actor (Hoffman) who becomes a star when he transforms himself into a woman to land a soap opera role could have been a disaster. But rather than go for cheap laughs, Hoffman, the writers, and producer-director Sydney Pollack (who appears as Hoffman’s agent) created a very human story. Hoffman’s Michael Dorsey may be in his forties, but becoming Dorothy Michaels makes him grow up, forcing him to see life from a totally different perspective. Tootsie was nominated for 10 Oscars, including Best Picture, Director, Actor, and Original Screenplay, winning for Jessica Lange’s supporting performance. (d. Sydney Pollack, 117m, Digital)