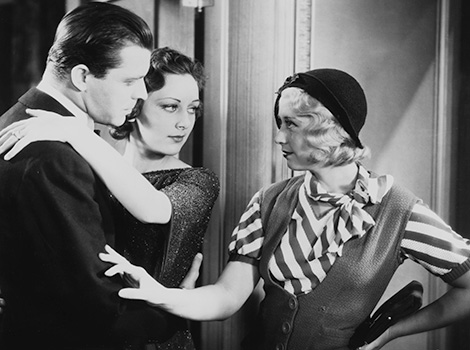 It’s hard to believe Bette Davis would ever have played third fiddle to two other actresses, but 90 years ago, she was newly arrived at Warner Bros. and had yet to establish her big-screen persona. Three schoolmates—played by Davis, Joan Blondell, and Ann Dvorak—reunite and share a cigarette, with the third to light hers proving an old superstition true. The rest of the film follows the fates of bad girl Dvorak and showgirl Blondell, with Davis acting as garnish to their run-ins with high society and gangsters (including a young Humphrey Bogart). At the time, Dvorak was getting the star push at Warners after her dazzling performance as Paul Muni’s sister in Scarface (1932). As Davis would do later, Dvorak fought for better scripts and more money, but unlike Davis, her fights with management hurt her career. Director Mervyn LeRoy deftly juggles the film’s plotlines, tidily wrapping them up in just over an hour. But he proved no prophet when it came to judging talent, telling interviewers he didn’t think Davis’s career was going anywhere. (d. Mervyn LeRoy, 64m, 35mm)