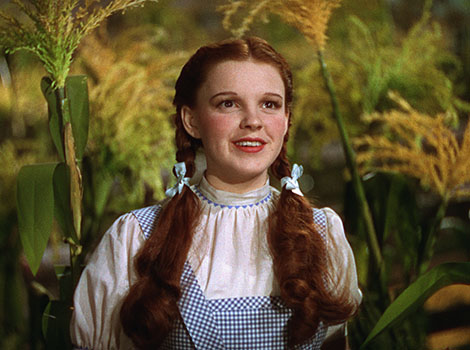 By now, the fantasy worlds of Kansas and Oz that MGM created on its backlot have become legendary. Dorothy’s fight to return home to Kansas continues to strike a chord with filmgoers. It’s hard to believe anybody but Judy Garland, whose 100th birthday comes June 10, was ever considered to play Dorothy. The role is so associated with her she closed every concert in later years with the score’s biggest hit, “Over the Rainbow.” Her costars—Ray Bolger, Bert Lahr, Jack Haley, and Margaret Hamilton—would also be associated with their roles for the rest of their lives. Like most productions of Hollywood’s Golden Age, the film was a collaborative effort, with an estimated 14 writers and five directors at various times. Yet its intelligence and the careful integration of music and plot are the hallmarks of producer Mervyn LeRoy’s assistant, Arthur Freed, who would go on to head the studio’s famous musical production unit. As great as his later productions were, including the Oscar-winning An American in Paris (1951) and Gigi (1958), The Wizard of Oz remains the most beloved of all his films, a tribute to young-at-heart audiences everywhere. (d. Victor Fleming, 102m, Digital)