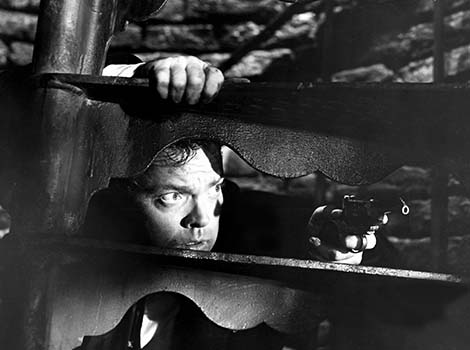 Dripping with atmosphere and moral ambiguity, The Third Man has been hailed as the best of the international noirs and one of the greatest British films ever made. American writer Holly Martins (Joseph Cotten) travels to postwar Vienna to see old friend Harry Lime (Orson Welles), only to learn Lime has died…or has he? A search through the divided city uncovers horrible secrets about the black market, pulling Martins out of his American naiveté and into a realization that nothing in this world is what it seems. The film originated with producer Alexander Korda, who suggested a thriller set in Vienna, and writer Graham Greene and director Carol Reed’s creation works as both mystery and social commentary. Robert Krasker won an Oscar for his dazzling black-and-white cinematography—most of it shot at night. Just as iconic as the glistening cobblestone streets and sewers he captured on film is the innovative zither score by Anton Karas, a major departure from the typical symphonic film score. (d. Carol Reed, 105m, Digital)

Special Guest Ernest R. Dickerson Special Guest Eddie Muller
Be in the know on everything related to the TCM Classic Film Festival Sign Up For TCM Emails
By clicking the 'Submit` button I acknowledge the Privacy Policy