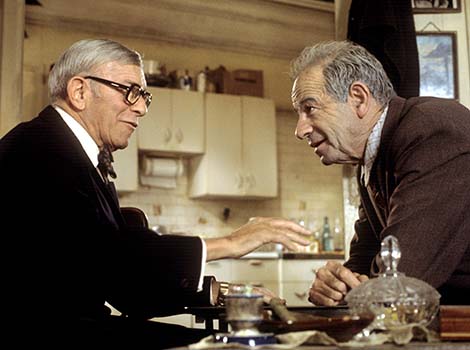 George Burns reunited with movie fans for this comic tale of a vaudeville team getting back together after years of acrimonious estrangement. Though Neil Simon’s original play had been a hit, he and director Herbert Ross decided they needed a box office name in one of the lead roles. They brought in Walter Matthau, a veteran of two other Simon film adaptations, including The Odd Couple (1968). Jack Benny was originally cast to costar, but when he became ill, he suggested his friend Burns, who hadn’t made a movie since Honolulu (1939). Burns wasn’t exactly retired at the time. He’d been touring a one-man show, in addition to appearances on television. But he jumped at the chance to get back into movies, learning the entire script before the first read-through. He and Matthau were magic together, and when the studio decided to push him for a Best Supporting Actor nomination, he became the sentimental favorite. He won the Oscar, and The Sunshine Boys launched a new career for him as an esteemed character actor. (d. Herbert Ross, 111m, Digital)