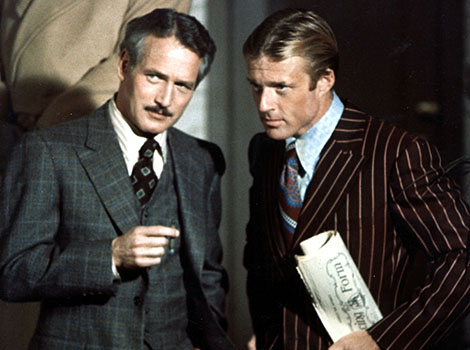 Four years after the success of Butch Cassidy and the Sundance Kid (1969), director George Roy Hill and stars Paul Newman and Robert Redford reunited for a film that not only topped the earlier picture’s box office but walked off with seven Oscars. The Sting depicts a massive con the team attempt to pull on a Chicago crime boss (Robert Shaw), partly as revenge for the murder of Redford’s partner. Before they can pull the wool over Shaw’s eyes, however, they must dodge a hired assassin, a crooked cop, and an FBI agent. Hill used every trick he could to capture the film’s Depression-era setting, including title cards in the style of Saturday Evening Post covers, a muted color scheme, and the use of iris shots and editing wipes, devices associated with early cinema. He went back further in time for the music, with Marvin Hamlisch building his score around Scott Joplin’s early 20th century ragtime pieces. The main theme, “The Entertainer,” became a top-10 hit and brought Joplin back into prominence—and an Adapted Score Oscar to Hamlisch. (d. George Roy Hill, 130m, Digital)