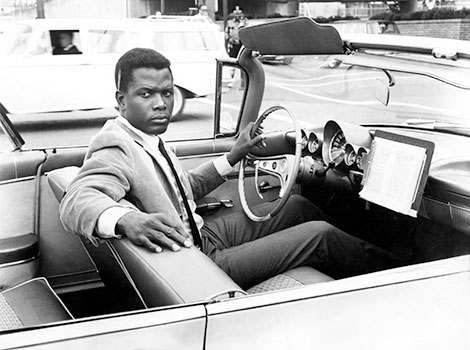 Sidney Poitier stars as a crisis center employee who tries to keep a suicidal woman (Anne Bancroft) on the phone when she calls in after overdosing, in this recent restoration of Sydney Pollack’s big screen directorial debut. After nearly a decade of work as an actor and TV director, Pollack’s efforts here—along with composer Quincy Jones and cinematographer Loyal Griggs, whose black-and-white images depict a Seattle rarely seen on screen—generate maximum tension as Poitier’s associates try to trace the call. Though the script, Stirling Silliphant’s adaptation of a Life magazine article by Shana Alexander, gave no indication of the hotline worker’s race, Poitier’s agent convinced him to go up for the role and Pollack was thrilled to have him join the cast. Coincidentally, Bancroft had presented Poitier his Oscar for Lilies of the Field (1963) at the 1964 Academy Awards ceremonies. Though their relationship is central to the film, they never physically shared a scene, but rather communicated through a special phone hook-up during filming. (d. Sydney Pollack, 98m, Digital)