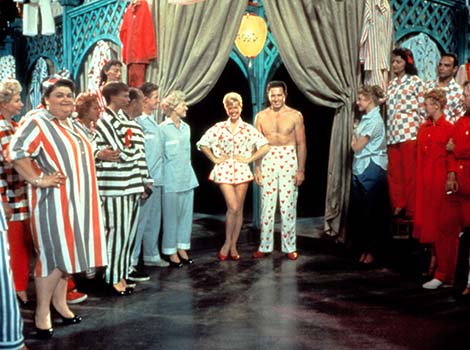 In honor of Doris Day’s 100th birthday, the TCM Classic Film Festival presents her triumphant return to Warner Bros., the studio that made her a star. Studio head Jack Warner picked up the rights to this musical and Damn Yankees, two Broadway hits directed by George Abbott and choreographed by Bob Fosse. He wanted to film both with as much of their original Broadway casts as possible, but also wanted one established film star in each as box office insurance. The first choice for that honor in The Pajama Game was Frank Sinatra. When he turned the role down, it went to the originator of the part, John Raitt. Day, who had completed her Warners contract in 1954, was then hired as the film’s marquee draw and got to sing hits like “Hey There” and “I’m Not at All in Love.” Stanley Donen signed on to codirect and coproduce with Abbott, giving a special cinematic zip to Fosse’s original numbers. Along with Raitt, other veterans of the original cast included Eddie Foy, Jr., Reta Shaw, and Carol Haney, whose spirited rendition of “Steam Heat” is one of the film’s highlights. (d. George Abbott & Stanley Donen, 101m, Digital)