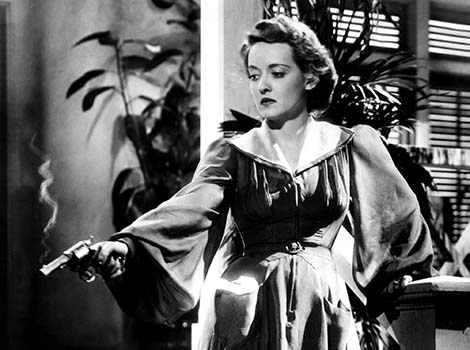 From the opening shots of a Malayan rubber plantation at night to its final, moon-drenched garden scene, this is one of the most emotionally potent films directed by William Wyler. It also showcases Bette Davis in a stellar performance as Leslie Crosbie, an upper-class woman who pumps six bullets into a man then spends the rest of the film lying to cover her real motive. W. Somerset Maugham’s original play had been a hit and the legendary Jeanne Eagels, one of Davis’s heroes, starred in the first film version in 1929. Warner Bros. picked up the rights for Davis and wisely reunited her with Wyler, who had directed her to an Oscar in Jezebel (1938). It was his idea to associate Davis’s character with the moon, which creates a powerful recurring image and elevates the film above mere melodrama. He also matched her with a strong supporting cast including Herbert Marshall (who had played the murder victim in the earlier version) as her husband, James Stephenson as her lawyer, and Gale Sondergaard as the victim’s Eurasian wife. (d. William Wyler, 95m, Digital)