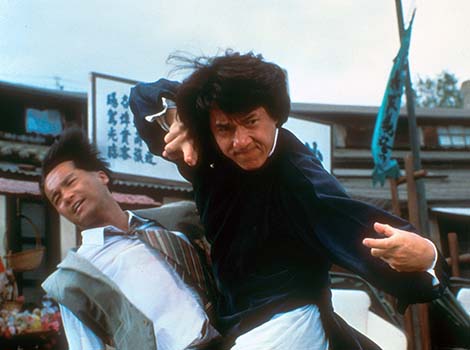 One of Jackie Chan’s biggest hits and a film often ranked among the greatest action pictures ever made screens in a version rarely seen in the West. Chan had become a star with the comic action film Drunken Master (1978). It took him 16 years to bring this sequel, his first traditional martial arts film since Dragon Lord (1982), to the screen. The continuing adventures of Wong Fei-hung pit him against British colonial forces out to steal precious artifacts from turn-of-the-century China. The ensuing battles incorporate five different fighting styles, including Shaolin Kung Fu, Taekwondo and Drunken boxing. The climactic seven-minute fight, directed by Chan after he quarreled with director Lau Kar-leung, took four months to film, with most days producing only three seconds of usable footage. When Drunken Master II premiered in Asia, it set box-office records. It did not reach the U.S. until 2000 as The Legend of Drunken Master, with English dubbed into bad Chinese accents, inaccurate names for some of the moves, a new score, and some new sound effects. This screening features the original, uncut Hong Kong version with English subtitles. (d. Lau Kar-leung, 102m, Digital)