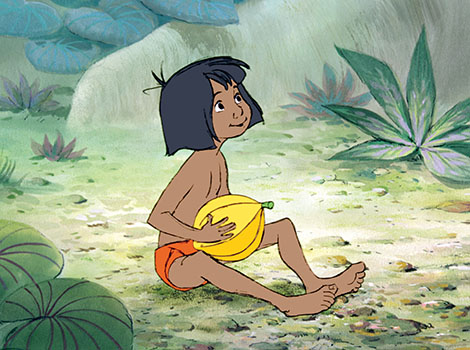 Frequently hailed for containing the best character animation ever—including the work of Disney Legend Floyd Norman, who played a vital role in the design and creation of the “Trust in Me” sequence, among others—Walt Disney’s adaptation of Rudyard Kipling’s stories was the last animated feature Disney personally supervised. To join the disparate stories, the writers created a simple plot. The animal friends of Mowgli, a human orphan raised by wolves, try to convince him to return to civilization to avoid the wrath of ruthless tiger Shere Khan. When Disney found the initial draft story and musical score too dark, he brought in writer Larry Clemmons and songwriters Richard M. and Robert B. Sherman—but he did keep the song “The Bare Necessities,” written by Terry Gilkyson, which became the film’s biggest hit and earned an Oscar nomination. This was the first time Disney went after name actors to voice major roles, casting George Sanders, Phil Harris, and Louis Prima alongside such studio stalwarts as Sterling Holloway, J. Pat O’Malley, and Verna Felton. (d. Wolfgang Reitherman, 78m, Digital)