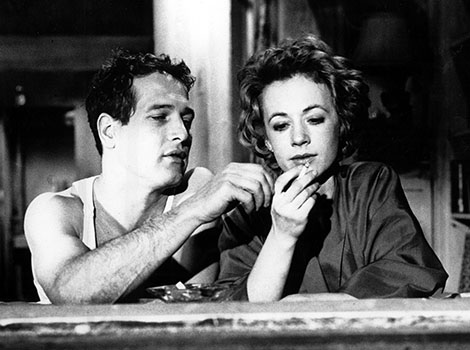 With its gritty depiction of a world of pool halls and seedy hotel rooms, The Hustler marked a major departure from Hollywood glamour. There was nothing heroic about Paul Newman’s tortured pool hustler, “Fast Eddie” Felson, even when he stood up to George C. Scott’s Mephistophelian gambler. Yet the role has become iconic, capturing a disillusioned generation’s realization that morality is less a question of black and white than of competing shades of gray. Producer-writer-director Robert Rossen had hustled pool in his early years and tried to put that experience into a script of his own. Eventually he latched onto Walter Tevis’s 1959 novel and crafted such an expert screenplay that Newman and costar Piper Laurie reportedly said “yes” to the film before they’d finished reading it. In an inspired but unexpected move, he cast TV comic Jackie Gleason, an accomplished pool player, as champion “Minnesota Fats.” Despite its lack of glamour, The Hustler was a big hit, winning Oscars for Art Direction (Black and White) and Eugen Schüfftan’s cinematography and giving the game of pool a new popularity. (d. Robert Rossen, 135m, Digital)