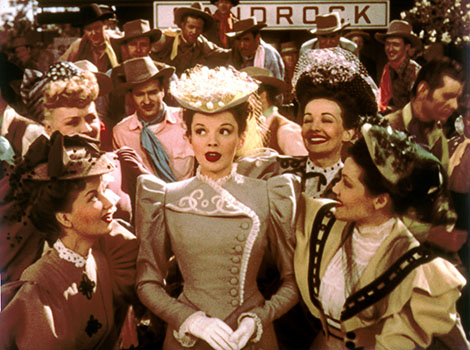 Judy Garland wins the West in this Technicolor genre mash-up. MGM had bought the rights to Samuel Hopkins Adams’s novel about Harvey House, the real-life restaurant chain that brought civilization to the West, as a vehicle for Lana Turner. Then one of Garland’s mentors, producer and arranger Roger Edens, saw Oklahoma!, which made him realize the story’s potential as a musical vehicle for the multi-talented star. It took some convincing to get her to do it, but eventually Garland agreed and delivered one of her best performances. She sings the film’s biggest hit, “On the Atchison, Topeka and the Santa Fe,” and demonstrates her comedic skills as the plucky waitress who vies with a dance-hall girl (Angela Lansbury) for the heart of a saloon owner (John Hodiak). The film also showcases Virginia O’Brien, Ray Bolger, Marjorie Main, and—in her first speaking role—Cyd Charisse. “On the Atchison, Topeka and the Santa Fe” won the Oscar for Best Original Song. (d. George Sidney, 101m, Digital)