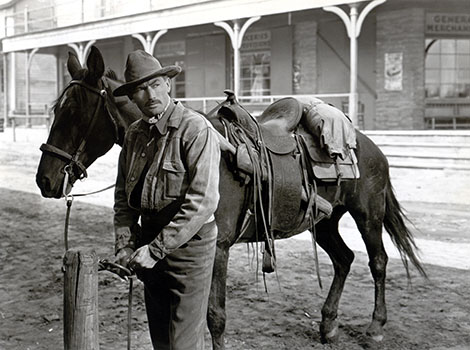 Often hailed as the first adult Western, The Gunfighter is a far cry from the two-dimensional shoot-em-ups churned out by B-movie units. This 20th Century-Fox production is top drawer all the way, from Henry King’s direction to Gregory Peck’s melancholy performance as a former gunfighter stuck with the label “fastest draw in the West.” His Jimmy Ringo keeps getting pulled into shoot-outs with eager young gunslingers when all he wants to do is reconnect with the wife and child he left behind. Writer William Bowers was inspired by the plight of former boxing champ Jack Dempsey, who complained that people kept wanting to fight him. He refined the story with André De Toth, then finished the script with William Sellers. They had created the role for John Wayne, who wanted to buy the rights, but when the Duke offered them too little money they shopped it elsewhere. Columbia wanted to make the film with Wayne, but the actor refused to work for them, so it wound up at Fox with Peck turning in one of his best performances. (d. Henry King, 85m, Digital)

Special Guest Alan K. Rode
Be in the know on everything related to the TCM Classic Film Festival Sign Up For TCM Emails
By clicking the 'Submit` button I acknowledge the Privacy Policy