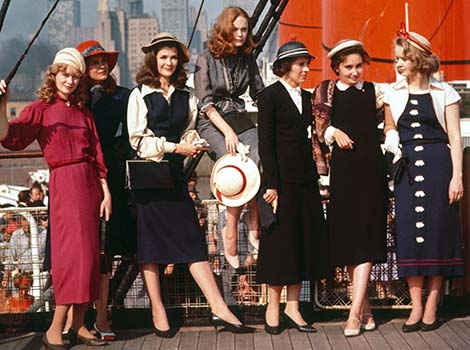 From the 1920s to the ‘60s, the “young girl takes life by storm” subgenre was a Hollywood staple. It not only allowed for a crowd-pleasing mix of comedy and melodrama, but also provided a showcase for younger actresses, from Joan Crawford in Sally, Irene and Mary (1925) to Ann-Margret in The Pleasure Seekers (1964). No wonder Hollywood was clamoring for the rights to Mary McCarthy’s scandalous 1954 bestseller, The Group, with its gallery of eight fascinating female leads. One of producer Charles K. Feldman’s and director Sidney Lumet’s triumphs was their casting of the talented young Shirley Knight, Joan Hackett, Jessica Walter, Candice Bergen, Elizabeth Hartman, Kathleen Widdoes, Joanna Pettet, and Mary-Robin Redd as a group of college graduates facing life in Depression-era America. From first sexual experiences to marriage problems, the film tackles a wide range of topics to create what Pauline Kael called “one of the few interesting American movies of recent years.” (d. Sidney Lumet, 152m, 35mm)