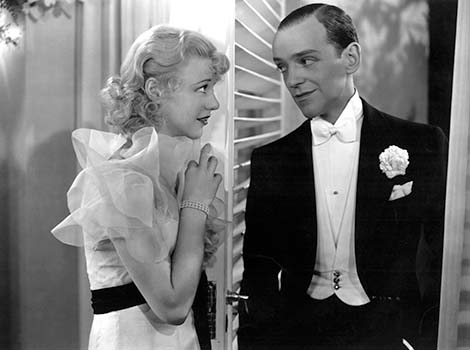 After their dance duet to “Carioca” in Flying Down to Rio (1933) stole the show from stars Dolores Del Rio and Gene Raymond, RKO was eager to reunite Fred Astaire and Ginger Rogers. They did not have to look far for material. Astaire’s last Broadway hit before coming to Hollywood had been Cole Porter’s The Gay Divorce. With a title change to appease the censors (a divorcee could be gay, but a divorce could not), the tale of a dancer (Astaire) getting involved with an unhappily married woman (Rogers) who schemes to get a divorce became a huge hit, leading to eight more films together. RKO only kept one number from Porter’s score—“Night and Day”—but it’s a winner, with Fred sweeping Ginger up in a very sensual dance. Later they cavort around a seaside hotel to a new tune, “The Continental,” the first winner of a Best Song Oscar. The supporting cast includes daffy dowager Alice Brady, gigolo Erik Rhodes, obsequious waiter Eric Blore, ineffectual lawyer Edward Everett Horton, and a flirtatious Betty Grable, with the latter two teaming for the comic “Let’s K-nock K-nees.” (d. Mark Sandrich, 106m, 35mm)