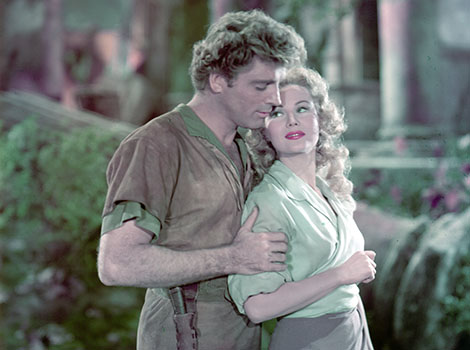 The idea for swashbuckler The Flame and the Arrow came from Nick Cravat, Burt Lancaster’s childhood friend who had worked with him in the circus. Cravat suggested he follow in silent star Douglas Fairbanks’s footsteps by making an action film in which he would perform all his own stunts. Writer Waldo Salt created a story about an athletic archer (Lancaster) who leads an outlaw band against a corrupt nobleman. Lancaster and partner Harold Hecht produced the film through their Norma Productions and sold the package to Warner Bros., giving them access to the studio backlot and set pieces and costumes from Errol Flynn’s earlier adventures. Oscar-winning sound designer Ben Burtt and Oscar-winning visual effects supervisor Craig Barron precede the film with a special Academy Conversation, discussing the tricks director Jacques Tourneur and his crew used to make the film so impressive, joined by former child actor Gordon Gebert. (d. Jacques Tourneur, 88m, 35mm)