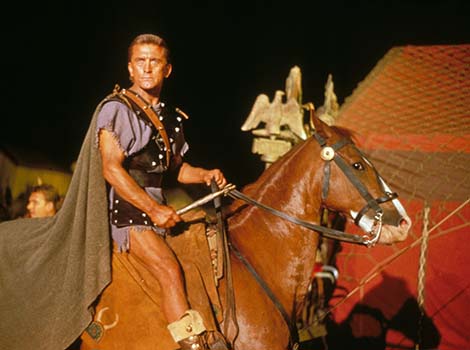 When Kirk Douglas lost the title role in Ben-Hur (1959) to Charlton Heston, he decided to make his own Roman epic. A move he would later call “childish” produced one of the great sword-and-sandal films, seen here a brand-new 70mm print. Loosely based on historical events, the film contrasts an escaped slave’s fight for freedom and dignity with the corruption of the Roman Empire. Blacklisted writer Dalton Trumbo’s credit for this screenplay and Exodus (1960), as well as President Kennedy’s ringing endorsement of Spartacus, effectively ended the Hollywood blacklist. After clashing with director Anthony Mann, Douglas replaced him with Stanley Kubrick, with fond memories of their work together on Paths of Glory (1957). Soon enough though, Douglas and Kubrick were also at odds, mainly because Kubrick didn’t like the script. Cinematographer Russell Metty also quarreled with Kubrick halfway through production. Kubrick finished shooting the film himself, but Metty got the credit and the Oscar. The film also won for its art direction, costumes, and Peter Ustinov’s supporting performance. (d. Stanley Kubrick, 197m, 70mm)