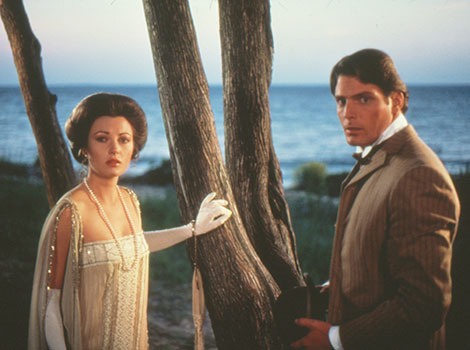 Christopher Reeve enters a romantic fantasy of the past in this timeless love story. The actor was looking for a change of pace after his star-making turn in Superman (1978) and found it in the gentle tale of a playwright who travels back to 1912 in search of an early 20th century actress (Jane Seymour) whose image fascinates him. Richard Matheson adapted the screenplay from his 1975 novel Bid Time Return but had to change the setting from San Diego’s Hotel del Coronado, which had recently been modernized, to the Grand Hotel on Mackinac Island, Michigan. Director Jeannot Szwarc shot in soft focus and placed background extras into compositions inspired by Impressionist paintings. Then composer John Barry tied it all together with one of his most romantic scores, featuring the 18th variation from Rachmaninoff’s Rhapsody on a Theme of Paganini. Though Somewhere in Time didn’t fare well in theaters, it has since gained a following thanks to cable telecasts and home video, which also turned the soundtrack album into a hit. (d. Jeannot Szwarc, 104m, Digital)