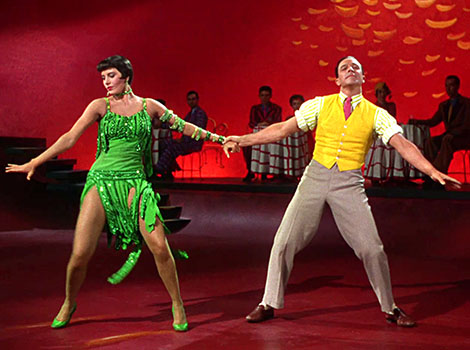 Though now considered by many to be the greatest musical Hollywood ever produced, Singin’ in the Rain famously received only two Oscar nominations—Best Supporting Actress (Jean Hagen) and Best Scoring of a Musical—and lost both. Through repeated television airings and revival-house screenings, along with changes in critical taste that have elevated the standing of once-undervalued genres, the film has since risen to legendary status. After the success of An American in Paris (1951), created to showcase the George Gershwin songbook, producer and lyricist Arthur Freed wanted to do a musical built around his own songs. Betty Comden and Adolph Green came up with a plot about a silent-screen idol (Gene Kelly) adapting to the coming of sound. Codirectors Kelly and Stanley Donen made the whole thing sing—and dance—with some of the most iconic musical sequences ever filmed. 70 years later, screenings of Singin’ in the Rain send devoted fans singing and dancing down the streets. (d. Stanley Donen & Gene Kelly, 103m, Digital)