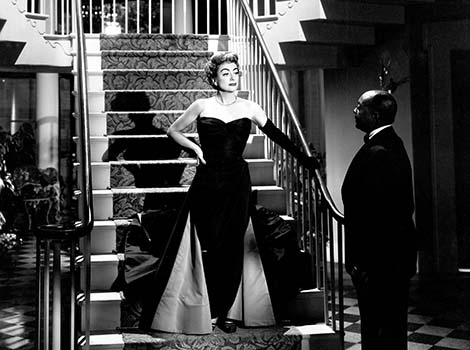 Joan Crawford was at her best and her worst when she made this lurid melodrama. As a Southern matriarch out to keep her former lover (John Ireland) from marrying her sister-in-law (Betsy Palmer), she’s evil personified. She trashes one rival’s bedroom and uses the engagement party to reveal her past affair. Yet Crawford plays it all so sincerely, it’s hard not to respect her manic energy—though later fans have labeled her serious approach to the role “camp.” Off-screen, she was beyond generous to her coworkers. Screenwriter Ranald MacDougall, who had previously written her films Mildred Pierce (1945) and Possessed (1947), wanted to move into directing and Crawford insisted he get the job here. She wasn’t a complete saint, however. During production she embarked on an affair with Ireland that helped end his marriage to actress Joanne Dru. Though it received mixed reviews, Queen Bee garnered a pair of Oscar nominations for Charles Lang’s cinematography and Jean Louis’s costumes. (d. Ranald MacDougall, 95m, Digital)