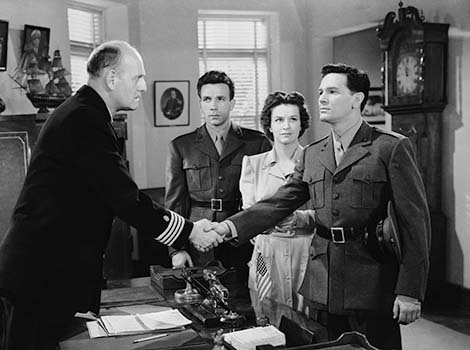 John Garfield found his favorite role of his career when he read a Life magazine story about Al Schmid, a Marine who lost his sight while fighting on Guadalcanal and had to readjust to life back home. Garfield campaigned for his studio, Warner Bros., to film the story and researched the part by visiting Schmid in his native Philadelphia. Under Delmer Daves’s direction, Pride of the Marines became one of the best films about World War II and its veterans. Daves skillfully carries the film from domestic scenes of Schmid courting his future wife (Eleanor Parker) to brutal war scenes, to the main character’s postwar readjustment, complete with dream sequences that get to the root of the character’s insecurities. Albert Maltz’s Oscar-nominated script was praised at the time for its sensitive depiction of postwar social problems. A few years later, however, those same passages were cited by the House Un-American Activities Committee as supposed evidence of Maltz’s efforts to spread Communist propaganda, which led to his being blacklisted as a member of the Hollywood Ten. (d. Delmer Daves, 120m, 35mm)