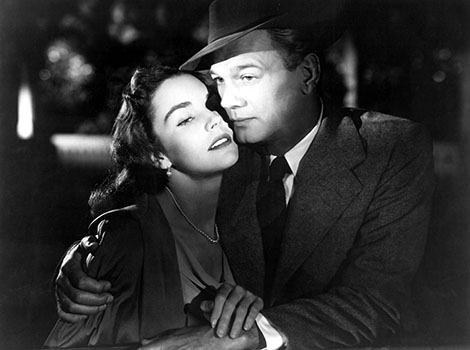 Producer David O. Selznick’s labor of love about a labor of love was a tribute to the ethereal beauty of his protégée and future wife, Jennifer Jones. She stars as a young woman who appears several times to a struggling painter (Joseph Cotten), in each instance looking years older than before. Her visits inspire him to create the title portrait, which turns his career around. Selznick spent over a year on the film, stopping the production for rewrites while the costs of filming entirely on the East Coast rose. The visuals are a knockout, with creamy black-and-white photography expanding to a green-tinted storm scene (originally shown in widescreen), sepia tones after the storm, and a dazzling Technicolor shot of the portrait. Those efforts brought the production an Oscar for Best Special Effects, but the film overall may have been too delicate for postwar audiences. With its high budget, Portrait of Jennie lost so much money it ended Selznick’s production company. Yet it remains one of the screen’s most romantic fantasies. (d. William Dieterle, 87m, 35mm)