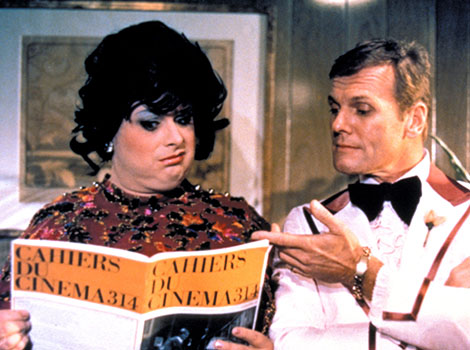 John Waters satirizes the women’s pictures of the 1950s, particularly those of Douglas Sirk, with this cult favorite that uses “Odorama” technology (scratch and sniff cards) for viewers to smell everything from flowers to flatulence at key points in the story. Whereas Sirk showcased glamorous stars like Lana Turner, the indie writer-producer-director presents the transgressive body of Divine, the 300-pound female impersonator of his underground classic Pink Flamingos (1972). Polyester was Waters’s successful bid to enter mainstream filmmaking on his own terms. It was the first of his films not branded with an X rating and the first to use a Hollywood star (‘50s heartthrob Tab Hunter) along with his stock company, dubbed the “Dreamlanders.” The film focuses on Francine Fishpaw (Divine), a frustrated housewife dreaming of a happy home. When she discovers her pornographer husband (David Samson) is cheating on her with his secretary (Mink Stole), she divorces him and takes up with the dashing Todd Tomorrow (Hunter), who runs a drive-in devoted to art films. (d. John Waters, 86m, Digital)