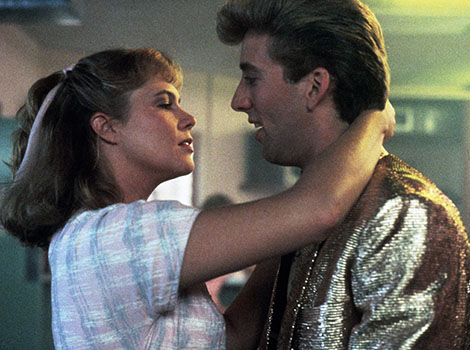 What would you change if you could relive your formative years? Peggy Sue Got Married offers one answer with Kathleen Turner as an unhappy woman on the verge of divorce who suddenly travels back in time to her senior year of high school. Should she break up with the boyfriend (Nicolas Cage) who would later become her cheating husband, or hook up with the offbeat loner (Kevin J. O’Connor) who always intrigued her, or maybe get with the future billionaire inventor (Barry Miller) she confides in about her trip through time? What makes this question so compelling are Turner’s charming lead performance and Francis Ford Coppola’s deft direction. Their work turned the film from a mere nostalgia piece into a touching comment on the choices we make. Turner earned an Oscar nomination and the National Board of Review’s Best Actress award. The film also features future stars Jim Carrey and Helen Hunt, along with screen veterans Don Murray, John Carradine, Maureen O’Sullivan, and Leon Ames in his last film.  (d. Francis Ford Coppola, 103m, Digital)