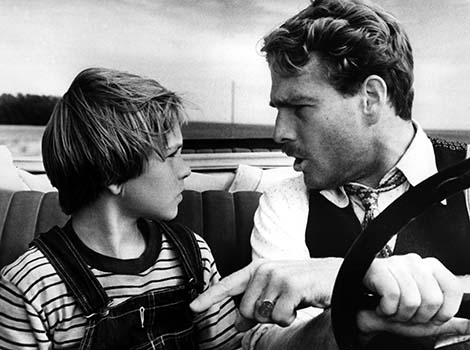 Tatum O’Neal became the youngest competitive Oscar winner in history when she was named Best Supporting Actress for her performance as the foul-mouthed nine-year-old con artist in this nostalgic look at the Depression-era Midwest. She costars with her real-life dad (Ryan O’Neal) as a swindler who, after her mother’s funeral, agrees to drive her to an aunt’s house only to discover she’s as good at fleecing suckers as he is. The adaptation of Joe David Brown’s novel Addie Pray was originally to have been directed by John Huston, with young Nell Potts and her father, Paul Newman, in the lead roles. When Huston dropped out, Peter Bogdanovich’s ex-wife, production designer Polly Platt, suggested the film would be perfect for him. She even recommended he test Tatum O’Neal, whose father he had just directed in What’s Up, Doc? (1972). Bogdanovich chose to shoot the film in black and white, with his pal Orson Welles suggesting that cinematographer László Kovács use a red filter to get a crisper image. Paper Moon would be one of the director’s biggest hits. (d. Peter Bogdanovich, 103m, Digital)

Special Guest Louise B. Stratten Special Guest Ben Mankiewicz
Be in the know on everything related to the TCM Classic Film Festival Sign Up For TCM Emails
By clicking the 'Submit` button I acknowledge the Privacy Policy