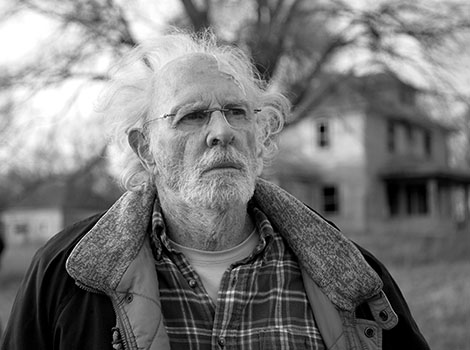 Alexander Payne was so moved by Bob Nelson’s script for Nebraska that it became the first film he directed from someone else’s screenplay. That’s quite a vote of confidence from the man behind Election (1999) and Sideways (2004). For the role of a cantankerous, aging man who is convinced he’s won a million dollars, he felt Bruce Dern was a perfect fit. Payne also envisioned the man’s road trip from Montana to Nebraska to collect the money, renewing ties with family and friends along the way, in black and white. Paramount didn’t agree with either choice and threatened to slash the film’s budget, but the studio relented when his previous film, The Descendants (2011), became an unexpected hit. They even let him bypass A-list names for the role of Dern’s son. That part went to Will Forte, a Saturday Night Live alumnus best known for comic performances. These choices proved inspired, as Nebraska became a critical hit, winning Dern Best Actor honors at Cannes and making the 84-year-old June Squibb—as his tough-talking wife—an overnight sensation. (d. Alexander Payne, 115m, Digital)