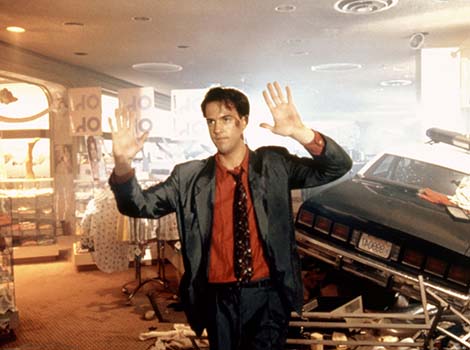 Part romantic comedy, part apocalyptic thriller, Miracle Mile was so unconventional it took almost a decade to get to the screen. Steve De Jarnatt wrote it shortly after graduating from the American Film Institute and before long, the script had become a Hollywood legend, named one of the industry’s best unproduced screenplays. One good thing about the delay was that by the time De Jarnatt finally got to make it his way, the young Anthony Edwards and Mare Winningham were old enough for the leads. They star as a couple who meet-cute at the La Brea Tar Pits and fall instantly in love. When Edwards accidentally learns World War III is about to start, he races through one long night to reconnect with Winningham and get her to safety. This tale of love in the age of mutually assured destruction was too original for box office success but has since gained a devoted following due to its energy, performances, and pulsing Tangerine Dream score. (d. Steve De Jarnatt, 87m, Digital)