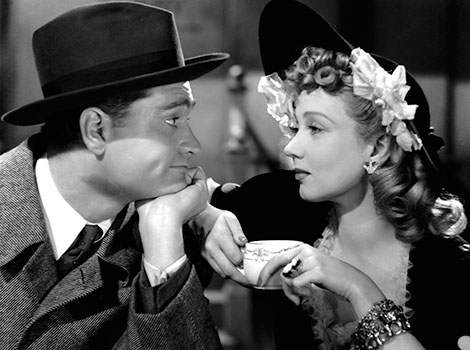 Ann Sothern usually did the heavy comedic lifting in her 10 screen appearances as Maisie Ravier, but for her sixth outing, MGM had her trade quips with Red Skelton as “Hap” Hixby, the Laugh Bandit. The studio was grooming the popular radio comic for screen stardom, and series films like the Maisie pictures were a perfect way to get him in front of audiences. MGM had originally bought the rights to Wilson Collison’s story Dark Dame as a vehicle for Jean Harlow. With her early death, they cast Sothern to play the wise-cracking showgirl and the role made her a star, with releases spanning 1939 to 1947. Here, her efforts to help Skelton’s character launch a comedy act get them both involved in a fake water-bottling business. Behind the camera was Roy Del Ruth, an accomplished comedy director who had gotten his start with Mack Sennett. He moved easily between big-budget musicals like Broadway Melody of 1936 (1935) and Born to Dance (1936) and low-budget series films, all of which he kept moving smoothly from number to number and gag to gag. (d. Roy Del Ruth, 86m, 35mm)