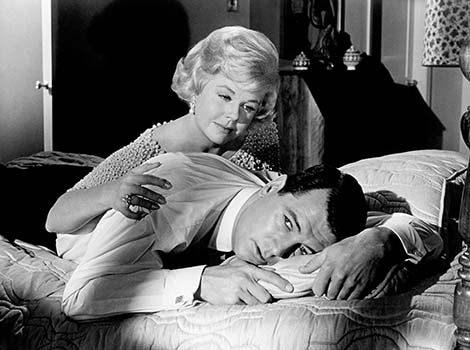 Years before Mad Men became the latest in water cooler television, Doris Day and Rock Hudson took on the ad business in the second of their three romantic comedies. In a plot similar to Pillow Talk (1959), they play enemies—rival ad execs—who’ve never met but fall in love when Hudson pretends to be somebody else. Day, whose 100th birthday we’re celebrating this year, works hard at her job, while Hudson swoops up clients by partying with them. Owing a chorus girl (Edie Adams) a favor, he shoots a bunch of commercials with her for “VIP,” a fake product. When his boss (Tony Randall) mistakenly puts them on the air, Hudson has to scramble for a quick fix, and Day—making a bid for the ad contract—thinks he’s VIP’s inventor. Director Delbert Mann had made his name with realistic adaptations of TV dramas like Marty (1955). His background kept the romantic farce grounded, which fit perfectly with Day’s own approach to playing comedy: you’re only funny if you don’t think you are. (d. Delbert Mann, 107m, Digital)