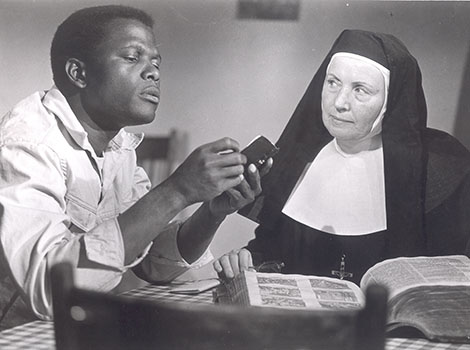 60 years ago, the late, great Sidney Poitier made history when he agreed to star in a low-budget film.  Nobody except Poitier and producer-director Ralph Nelson believed in the adaptation of William Edmund Barrett’s novel about a Black veteran who builds a chapel in the American Southwest for a group of German nuns. United Artists would only put up half the budget, so Nelson had to mortgage his house for the remainder. He even cast himself in a minor role, and he and Poitier worked for reduced salaries against a percentage of any profits. They couldn’t afford an art director, so props master Robert Eaton dressed the buildings on the ranch where they shot and took charge of having the chapel built. When it was released, however, the film took off. Critics and audiences loved it, with polls suggesting it was Poitier’s name that brought them into theaters. Not only did the film propel him to stardom, but it also made him the first person of color to win the Oscar for Best Actor. (d. Ralph Nelson, 95m, 35mm)